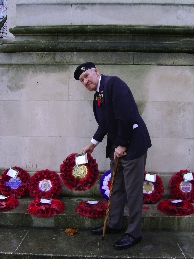 Yesterday we were down in Portsmouth for the Remembrance Day service at which my father (pictured right) was laying a wreath on behalf of the Italy Star Association.

This was (so far as I recall) the first Remembrance Sunday service I have ever attended, but of course could not on this occasion have missed my father doing his bit.

I would obviously have felt more comfortable with the service had it, on the one hand, not been religious (I suspect I may not be alone in being of the opinion that even some humanists, agnostics, and atheists may wish to commemorate the fallen in war); and, on the other hand, not concluded with the doubly offensive National Anthem (not only religious–“God save our …”–but also rather too pointedly pleading the bestowal of further blessings on the already over-blessed–“Thy choicest gifts in store / On her be pleased to pour”). What struck me as particularly interesting about the service, however, was the scattered references to ‘terror(ism)’, unimaginable I’d guess before “9/ll”:

“We pray for all who in bereavement, disability and pain continue to suffer the consequences of fighting and terror”

“civilian women, children and men whose lives are disfigured by war or terror”.

‘Terrorism’ has, of course, been around for a very long time, the term having been first used in reference to the ‘Reign of Terror’ (1793-1794) during the French Revolution. Throughout the nineteenth and twentieth centuries we have seen dubbed as ‘terrorist’, inter alia, Jewish settlers in Palestine (David Ben-Gurion, Irgun), the IRA, the French resistance (le Maquis) and the Yugoslav Partisans, the Palestinian Liberation Organisation, and South Africa’s Umkhonto we Sizwe. Leaving aside the old saw (and the now somewhat pointless debate) that “one man’s terrorist is another man’s freedom-fighter”, there seems to me no reason to dispute, deform, or dismiss the standard and well-established definition:

Terrorism in the modern sense is violence or other harmful acts committed (or threatened) against civilians for political or other ideological goals. Most definitions of terrorism include only those acts which are intended to create fear or “terror”, are perpetrated for an ideological goal (as opposed to a lone attack), and deliberately target or disregard the safety of non-combatants. (My italics)
http://en.wikipedia.org/wiki/Terrorism

Read that alongside (again, my italics in each of the quotes below):

On the Sunday nearest to 11th November at 11am each year, a Remembrance Service is held at the Cenotaph to commemorate British and Commonwealth servicemen and women who died in the two World Wars and later conflicts. The monarch, religious leaders, politicians, representatives of state and the armed and auxiliary forces, gather to pay respect to those who gave their lives defending others.
» http://www.bbc.co.uk/religion/remembrance/history/cenotaph.shtml

Remembrance Day … is a day to commemorate the sacrifices of members of the armed forces and of civilians in times of war
» http://en.wikipedia.org/wiki/Remembrance_Day

Many countries have a special day to remember those that fell in their wars; America has Veterans Day, while France has Armistice Day. The British commemorate those who fought, and are still fighting, in wars for their country on Remembrance Day.
» http://www.bbc.co.uk/dna/h2g2/A653924

So Remembrance Day commemorates “servicemen and women who died”, their “sacrifices”, “those who fought” … and “in wars for their country”, “in times of war”. Nothing, in fact, to do with “terrorism” or “terrorists”, which comes as something of a curious interloper in this discourse. Nothing to do with non-combatant civilians (“the sacrifices … of civilians in times of war”, such as of the Maquis or the FAI, for example, being that of an active civilian resistance).

Why, then, does the “terror” word and its morphological variants figure belatedly in the language of the Remembrance Day service? Because, I suspect, it has in the years since 11th September 2001 (rather than the iconified un-British English “9/11”) been thrust into popular discourse and popular consciousness as a bogeyman within a political agenda that has absolutely nothing to do with the proper job and regular service of our armed forces. To push “terror” into the Remembrance Day service is not only politically dishonest; it also shows horrendous disrespect to servicemen and women who face the traumas of real war, however legitimate it may or may not be, on a daily basis.

My father, for one, was disgusted.