Slavery, the “Natural World”, and a few dead white men 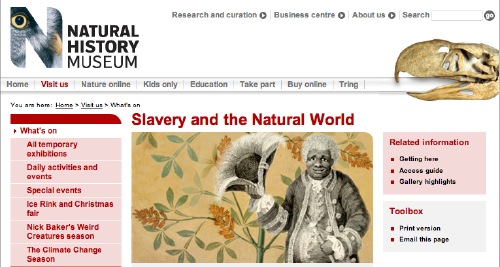 A series of events giving a unique perspective on the transatlantic slave trade through plants and people using natural history collections. The Natural History Museum looks after millions of specimens, books and artworks. Some of these reveal aspects of the transatlantic slave trade. Join us for a series of interactive events that will bring science, history and your perspectives together to rediscover our shared past. Slavery and the Natural World: People. Re-examine almost forgotten natural history records, which begin to recover the experiences of enslaved and indigenous people and their influence on science.

I have to preface what I write in the body of this article with a very sincere congratulatory word to the Museum, and in particular to Tracy-Ann Smith, Head of New Audiences in the Learning Department, who worked hard at conceptualising and realising the event. In the conservative world of museums–as in the culturally conservative and palpably parochial world view of contemporary British society overall–this has been a bold and courageous attempt both at acknowledging the importance of indigenous knowledge to the advancement of science and medicine and also at involving communities–including descendents of enslaved peoples–in the interrogation and interpretation of objects (at this point I don’t want to call them ‘exhibits’, and I cannot think of another generic term that captures their heterogenity that includes everything from medicinal plants to the potjie cooking vessel).

For the ‘workshop’ the 30 or so attendees were split into three groups, each group assembling around one of three tables of objects: ‘medicines and poisons’, ‘diet and nutrition’, ‘everyday life’. In the course of the hour the groups would rotate so that each group would have visited each of the tables.

Each table was supervised by two museum Learning Department staff who, through dialogue and explanation, talked the visitor-participants through the items displayed. I was delighted to note–and in particular for an event such as this–the Museum’s obvious commitment to workforce diversity: black and minority ethnic groups (BME) are generally under-represented in the heritage sector in the UK, and scandalously so in the sector’s white-collar posts, and therefore it was encouraging to find that we were being expertly (and entertainingly) guided through the objects by Indian, Chinese, Armenian-Egyptian, and Caribbean education assistants. Our own group was sent first to the table of ‘everyday life’ items. Forgive me that I cannot remember what these items were … they were in any case unlabeled, and the elicitation through inspection and dialogue of their names and usage was the purpose of the exercise.

We moved as a group from ‘everyday life’ to ‘medicines and poisons’, and thence finally to ‘diet and nutrition’. On each of these last two tables there were, adjacent to each of the ‘objects’ (plants, foodstuffs), two laminated and treasury-tagged A5 pages showing the frontispiece of a book from the age of slavery and, behind, an extract from the book in commentary of the object. I was, in retrospect, careless in not making written notes of book titles and authors’ names, though I did at least make a mental note of a work by a “Henry Barham”. In any case, the books were written by contemporaneous authors (botanists, doctors, travelers, plantation owners) representative of the European white elite; and copies of the books are held by the museum as part of its library of the history of medicine and the natural world.

I worried about both ethical and epistemological concerns. My first concern, I suppose, was that which I always have with respect to museum collections: that objects, exhibits, decontextualised from the n-dimensional contexts of original occurrence and use, are at risk of (perhaps accidental) misrepresentation by the exhibiting institution and of misinterpretation by the museum visitor. The distribution of objects over the thematically labeled three tables, and the randomisation of the objects on each of these tables, seemed to me an undoubtedly unintended instance of this: would those who two hundred and more years ago ate and used these foodstuffs and plants have found it natural, with respect to their internalised models of the natural world, to organise them into the trichotomous categories of ‘medicines and poisons’, ‘diet and nutrition’, and ‘everyday life’? would African indigenous knowledge systems have organised and classified the objects in other ways? did the random distribution of objects across each of the tables inadvertently suggest an epistemology that would have seemed alien to the shared understandings of African communities of the sixteenth, seventeenth, eighteenth centuries? And, of course, the very fact of bringing the objects, as exhibits, into the museum itself highlights these as objects of clinical academic scrutiny dislocated and removed from their meanings within the lived experience of the peoples who used them. That I should feel compelled to write this is, I should add, not to be critical of the Natural History Museum, of course, but rather to be critical of the expectations and assumptions that centuries of “cabinets of curiosities” have inculcated in the European mind.

My second, and more specific, concern was that the only explanations and commentaries made available to visitor-participants at this event were those of Europeans schooled in an Aristotlean-Linnaean tradition of thought. Again I would stress that this observation is not intended as a hostile criticism either of the Natural History Museum or of the organisers of the event–the texts, held in the museum’s library as bona fide exemplae of the documented history of the long and universal human enterprise of striving to comprehend and engage with the natural world, bear testimony to the seriousness with which long-dead white men took lively interest in indigenous cultures. Yet in the absence of any complementary evidence of how the ‘exhibits’ might have had meaning within the epistemological framework of an African cosmology one could be easily tempted to see the juxtaposition of the ‘exhibits’ with the European texts as implicitly, albeit innocently, an expropriation of indigenous culture in a manner as definitive and uncompromising as the early Christian church’s expropriation, renaming, and reinvention of pagan sites and practices. In an age of brazen “bio-colonialism”1 by multinational pharmaceutical companies, the absence of the complementary voices is unfortunate.

Finally–and this is the only point at which I might take issue with the Museum itself–I felt slightly ill at ease with the very title of the event, “Slavery and the Natural World”. Plants, herbs, foodstuffs, that played so vital and intimate a role in the daily lives of peoples will have been overlaid with cultural meanings and significances that will have removed them from the domain of the purely ‘natural’ such as to make a European botanist’s reading as ‘un-natural’ as it is inappropriate in understanding their significance and use. Furthermore, to locate the ‘exhibits’ firmly and categorically in the ‘natural’ world is itself an act of classification that reflects a to some degree arbitrary and not uncontentious Eurocentric discourse that partitions the phenomenal world into ‘nature’ and ‘culture’ (see e.g. Williams, 1980, and Soper, 1995).

My feelings at the end of the two-hour event were that the Natural History Museum–which, as such, could easily excused itself from any reflection on Britain’s role in the slave trade–had taken a courageous and innovative step in drawing public attention to indigenous knowledge systems consequent on the slave trade; yet I also felt that an important intellectual opportunity was being lost, specifically to throw into question the foundations of Western scientific knowledge by juxtaposing it against African epistemology (as, for example, Robin Horton so admirably does in his seminal essay ‘African Traditional Thought and Western Science’). Since Western taxonomic thinking is, after all, not as unproblematic as we might prefer to think (as George Lakoff, 1987, p.185ff, highlights with respect to, for example, the dissonance between phenetic and cladistic criteria for classification), I would have felt intellectually happier, as well as ethically more comfortable, with an event titled–and its honoring such a title–“Slavery, Indigenous Knowledge, and Western Science: Ways of Knowing”.

Final verdict? I award the Natural History Museum 8 out of 10 for what is in most respects an inspired and intellectually engaging event. I hope I shan’t seem mean-spirited in withholding the remaining 2 marks until the moment when, in recognition of the fact that the interpretation of indigenous knowledge need not and should not be the prerogative of dead white men, the Museum complements the event with a presentation of indigenous understandings that, as much as the English texts, properly constitute part of humankind’s global contributions to the history of medicine and the natural world.