St George & the Griffin–reclaiming the flag 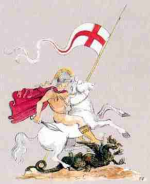 Yes, indeed, on this day we in England commemorate the matyrdom, on 23rd April 303, of the Anatolian- or Syrian-born Hellenophone patron saint of Palestine. And of Ethiopia. And, come to that, of Georgia (possibly named after the saint), Aragon, Catalonia, Greece, Portugal, and Russia, as well as of the cities of Amersfoort, Beirut (where St George is said to have slaughtered the griffin dragon), Ferrara, Freiburg, Genoa, Ljubljana, and Moscow.

“There is a tradition in the Holy Land of Christians and Muslims going to an Eastern Orthodox shrine for St. George at Beit Jala”, one reads in Wikipedia, for it is at Beit Jala that many believe St George was born. “Do you get many Muslims coming here?” the writer and historian William Dalrymple asked the local priest in 1995. “We get hundreds! Almost as many as the Christian pilgrims. Often, when I come in here, I find Muslims all over the floor, in the aisles, up and down.”

It is singular that the Moslem Arabs share this veneration for St. George, and send their mad people to be cured by him, as well as the Christians.”

Ah! how heartening it is to see our citizenry proudly flying that red-and-white flag in celebration of the life of a Palestinian martyr and of the multi-culturalism in our Rainbow Nation. And, if the Muslims of Beit Jala are correct, maybe a few of our Anglo-Saxon citizens may yet, through their obvious devotion to Saint George and in their carrying of that commemorative flag, hope to be cured by him.

The most effective way to counter the bigots, the fanatical chauvinists, and the racists, it seems to me, may be for the rest of us to ‘reclaim the flag’ … for Palestine, for Ethiopia, for Russia, and for the glorious heterogeneity that historically has characterised us, irrespective of colour or creed, as the ‘English’.