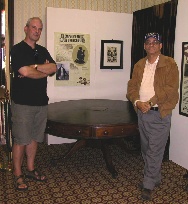 I went with Jatti Bredekamp yesterday to see the ‘Wilberforce table’ (more correctly, the ‘Buxton table’, since it was around this table in Thomas Buxton’s house that the key abolitionists met to hammer out the draft of the bill that would lead to the Abolition of Slavery Act in 1833) at The Old Town Hall, Stratford, where antiques expert Chris Wilde is blueprinting the replica to be built for the Museum of London’s traveling exhibition as part of its 1807-2007 bicentenary of the Act for the Abolition of the Slave Trade. Jatti, in his capacity as CEO of the Iziko Museums of Cape Town to which the replica will be traveling in May, had long been looking forward to seeing the original table, on display at The Old Town Hall from Thursday 19th April to Friday 25th May 2007 as part of the Borough of Newham’s own bicentennial exhibition, The Wickedest of Cargoes.

Chris explained to us some of the difficulties he faced in designing the replica. The understructure is clearly not original; the supporting four wooden pillars are also probably not original; though the matching wood-staining of the legs and body suggest that the legs are original. Had it originally been built as a revolving table? and had there therefore originally been a single supporting pillar? Chris explained to us how such a table would have been used by, for example, rent collectors who would have labelled each of the eight drawers either by a day of the week or by alphabetical name of client (A-C, D-F, etc). Since all that now remains is a lone “F” on one of the drawers, he’s not sure how they would originally have been labelled. He is also unable to open the drawers, clumsily secured with modern screws in the 1990s when the table, long in pieces, had been reassembled.

Chris drew our attention to another interesting link that the table has with slavery: the mahogany top, stained to look like teak, had been made from wood imported from the West Indies and undoubtedly cut by slave labour. 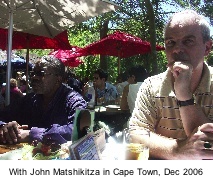 Jatti and I then walked on down the road to the Theatre Royal in Stratford, long home to Joan Littlewood’s Theatre Workshop Company, where actor and playwright John Matshikiza‘s play, Turning the Tables, commissioned by the Museum of London, is to be performed, with the replica table, in October at the end of its tour of Cape Town and Barbados. John’s play is wonderful. I read and reviewed the first draft of it back last Summer, making a few suggestions for revision. My strongest reaction was that, as I put it to John, one would need three PhDs to identify and understand the significance of every (sometimes oblique) reference: with its sweep over more than two millennia of history, a geographical compass taking in much of the globe from 5th century Athens to Tarik ibn Zayed’s Andoulasia to Toussaint Louverture’s Haiti, and its plethora of cultural references from Joseph Conrad to Archie Shepp, it’s an awesome work but—I suggested—one that might only be appreciated after the performance when the audience had had a chance to take home and study the script. I looked through the second draft last December when June and I met up with John in Cape Town: it’s now a little more accessible but I figure it should now stay as sublimely challenging as it is. Who, after all, would suggest a dumbing down of Joyce’s Ulysses or Pound’s Cantos?

Museum of London Group, ‘London and the transatlantic slave trade: Plans for 2007/2008 at Museum in Docklands’.

Abolition200: The Bicentenary of the Abolition of the Slave Trade. Website funded by the Awards for All programme and maintained by the 24 Hour Museum with support from the Museum Libraries and Archives Council (MLA).

HM Government, ‘Bicentenary of the Abolition of the Slave Trade Act’ [PDF1] [PDF2]

24hourMuseum, ‘Museum In Docklands To Lift Lid On London’s Role In The Slave Trade’.